Looking for information on galleys and other data for my research, I have come across a document that we could say talks about justice and prisoners’ rights. As the document is short and forceful, I have thought it would be a good idea to present it to you.

The king was the embodiment of justice during the Old Regime. He was seen as the perfect judge and for this reason the figure of the ”righteous king” is a recurring entity in the literature of the Spanish Golden Age. Royal justice contrasted with lordly justice. This last one was applied by a feudal lord within his demarcation and in short, it was much more capricious and unfair. In general, for serfs / subjects, it was much worse to be under lordly jurisdiction than royal and that is why many municipalities tried to ”buy their freedom” from their lords to be under royal rule. Just as my hometown Lloret de Mar did on the late date of 1790, when it wanted to compensate with 8,000 pounds to their lord, the Bishop of Girona, for the loss of his rights (the lawsuit was successfully resolved for the people of Lloret in 1802). 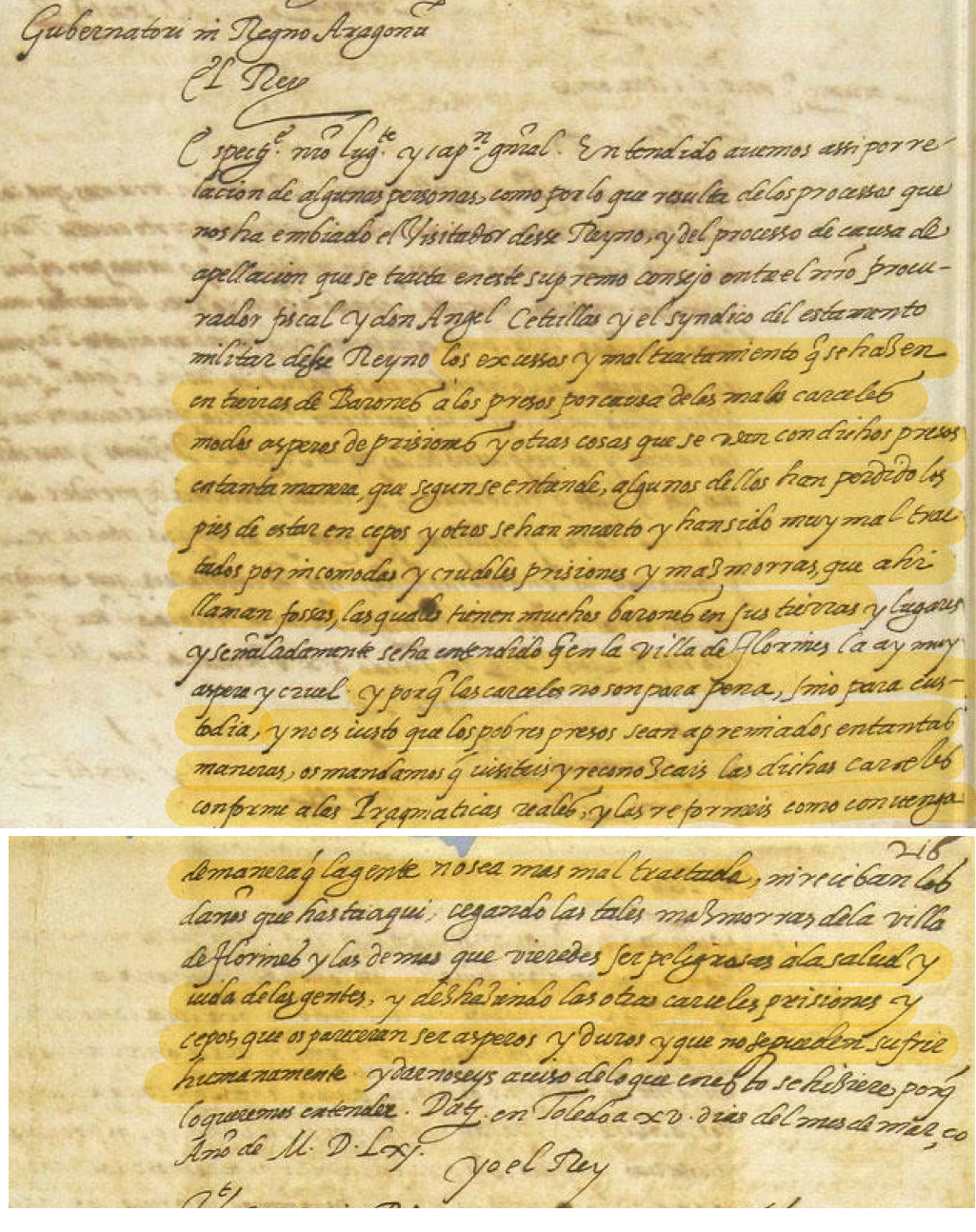 Although lordly abuses and atrocities (evil customs, mals usos) were much more characteristic during the medieval period (let’s remember the famous remences peasant revolts against lordly mals usos in Late Medieval Catalonia), in the Early Modern Age those abuses continued to exist. This is where the document comes in. King Philip II wrote to his viceroy of Aragon in 1561, that through different officers he had received information about:

the excesses and mistreatment that are done in the lands of barons to prisoners due to bad jails, harsh modes of prisons and other things witnessed with these prisoners in such a way that some of them have lost their feet from being in stocks [traps] and others have died and have been badly treated by uncomfortable and cruel prisons and dungeons (…) which many barons have on their lands (…). And because the prisons are not for punishment but for custody, and it is not fair that the unfortunate prisoners are compelled in so many ways, we command you to visit and examine the mentioned prisons in accordance with the Royal Pragmatics and to reform them as appropriate so that people no longer be mistreated (…), [for] being dangerous to the health and life of the people, and closing the other jails, prisons and stocks that seem rough and harsh to you and that cannot be humanely suffered”. (General Archive of the Crown of Aragon (ACA), C, Reg. Núm. 3901, ff. 215r. and 216v.)

It sounds pretty cool for the time, doesn’t it? But hey, remember that around this same time, the same king in need of rowers for his galleys amended the laws so that almost all the sentences condemned the “fit criminals” (men from 17 years old, without physical defects) to row in the galleys. Those criminals included not only murderers, rapists and thieves, but also beggars, gypsies, homosexuals or adulterers.

Jorge Aguilera López is a doctoral student who studies the Royal Shipyard of Barcelona, its activity and its European long distance trade connections all over Europe, including the Nordic kingdoms.