Maps are useful media for illustrating and analysing the spatiality of many social and environmental phenomena. Since the 1980s, researchers have increasingly recognized the value of ordinary people’s local knowledge and perceptions for research and spatial planning (Chambers 2006). Indigenous and other minoritized groups have also started to create their own maps to communicate their place-based knowledge and relations, and to resist the “official” images of the places mediated by the maps produced by external state authorities or scientists (Peluso 1995, Wood 2010, kollektiv orangotango+ 2018). In Ecuador, for example, the community maps recently played an important role in the fight of the Waorani over their right to their territory and in winning a legal court case (Scacca & Nenquimo 2021).

In 2019, before the onset of the Covid-19 pandemic, our project also carried out participatory mapping in intercultural bilingual upper secondary schools in Pastaza province. Three schools were selected for the study: Camilo Huatatoca in Santa Clara (majority of the students kichwas and mestizos), Kumay in the shuar territory and Sarayaku in the kichwa community. We were particularly interested in how the students perceive their living environment and their journeys between home and school. The students were asked to mark on the maps the places they like, do not like, places they think should be improved somehow and the places they find culturally important. In addition, they were asked to point out places where they had encountered some environmental problems. The students were also interviewed about their mappings.

Below are three charts that show the relative frequencies of different things that the students marked on their maps in three schools. 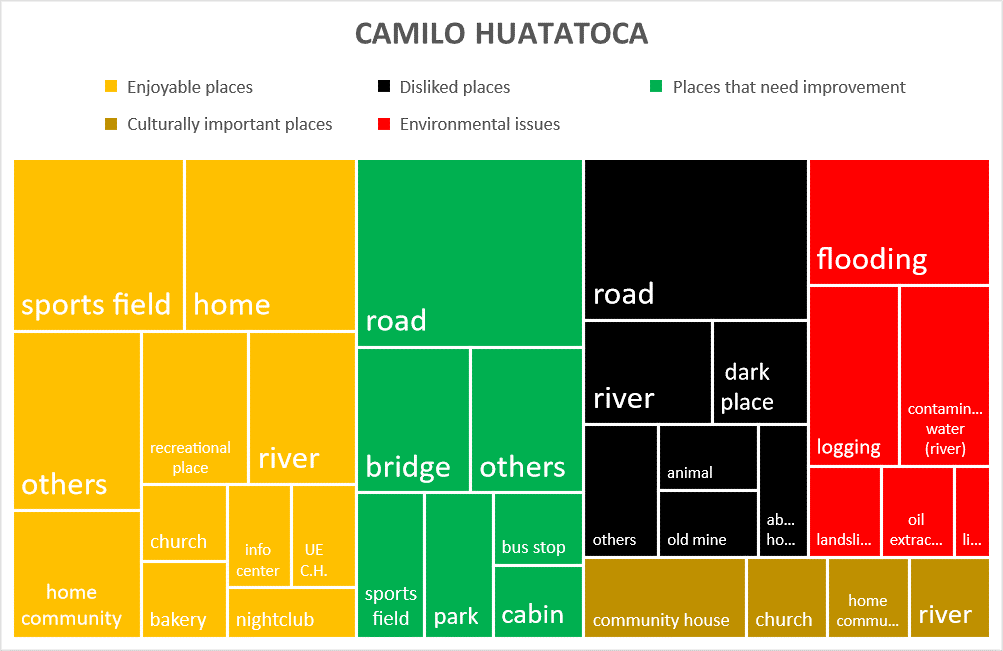 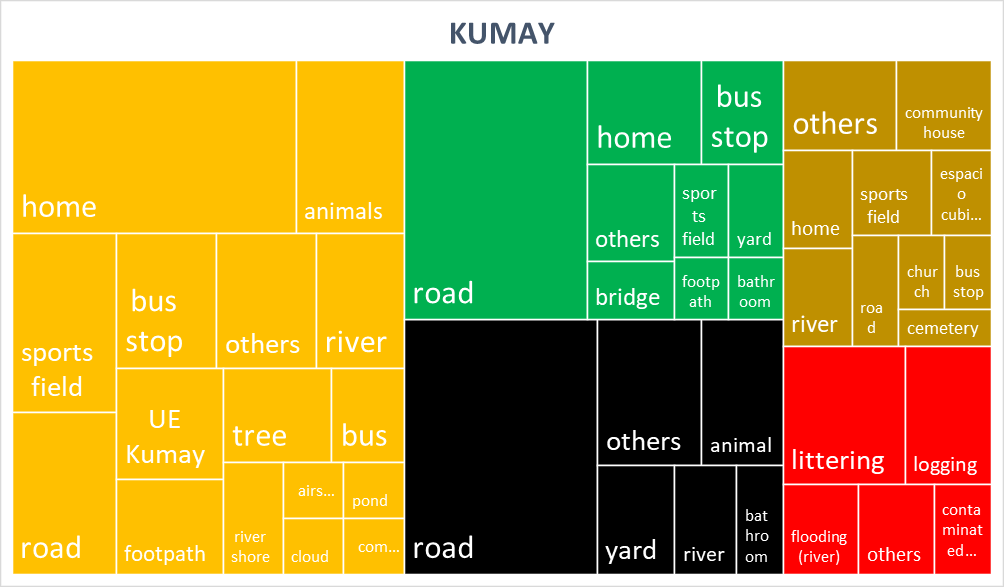 The second largest category of markings was typically the places that need improvement. Places that were marked to this category were often marked also as disliked places. For example, in Camilo Huatatoca and Kumay, the roads were most frequently mentioned in both these categories. In Santa Clara, this is understandable because the town is traversed by the Puyo-Napo highway that has relatively heavy traffic. The students also told that the smaller roads that lead to their home communities are often in poor condition and the cars drive fast on those roads. Interestingly, the students in Kumay expressed that they like roads and bus stops, but at the same time, these were also indicated as places that need improvement and were also disliked. The road connection that was constructed around six years ago from Puyo-Macas highway to Kumay and communities further away, has enabled faster travel by bus to school and to other places. However, at least during the time of our visit, the road was in quite bad condition and full of potholes. Near the school of Kumay, there is also a river Titinkiem that flows over the road and there is no bridge to cross it. Particularly when this river is flooding, it is difficult to go to school. In Sarayaku, there are no roads, only footpaths and the motorized transportation is limited to motor canoes in Río Bobonaza. In Sarayku, the students perceived many bridges to be in poor condition and thus also frightening. The bridges are also absent in many places where the small streams cross the footpaths and these places are particularly difficult to cross when the streams are flooding.

Of the environmental issues, floods were most often marked on the maps in Camilo Huatatoca and Sarayaku. Besides flooding, students also considered littering and logging environmental problems. However, in Sarayaku, logging is, according to the students, mainly related to making of chakras and therefore is not a major issue. In Kumay, logging has, however, increased significantly after the road was constructed and people began to sell timber outside. In Santa Clara, the forest has been cleared, for example, because of the construction of a water park, and the water contamination and oil spills have also been problems.

The maps drawn by the students give valuable information on the students’ daily experiences and on how they perceive indigenous territories and the socio-environmental issues threatening them. The maps could provide guidance for spatial planning and infrastructural improvements to increase the safety of school journeys. On another occasion, we will further analyze the maps and students’ experiences of their environment from the point of view of place-based learning and development of critical socio-environmental consciousness (Misiaszek 2020) that is important for the territorial defense.

Chambers, R. (2006). Participatory mapping and geographic information systems. Whose map? Who is empowered and who disempowered? Who gains and who loses? The Electronic Journal on Information Systems in Developing Countries 25:2, 1–11.

kollektiv orangotango+ (toim.) (2018). This is not an Atlas. A global collection of counter-cartographies. Bielefeld: transcript Verlag.

Scazza, M. and Nenquimo, O. (2021). From spears to maps: the case of Waorani resistance in Ecuador for the defence of their right to prior consultation. IIED, London.