by Victor Aurelio Llangari, teachers and parents of the Bilingual Intercultural Unit of San Jacinto

The practices of the peoples and nationalities of the Amazonia are of life. Therefore in 2017, an emphasis was placed on this knowledge in the Educational Institution of San Jacinto together with intercultural processes: First ritual ceremony for planting of Cedar and Guayacan trees in the memory of Dr. Thomas May, a biologist and a professor at the UEA, who came to the Amazonia with an International Cooperation project of German Cooperation Agency. Second ritual ceremony was organized to launch the San Jacinto ecological tourist trail sumakkuskakamay kawsaypacha chakiñan.

Members of the teaching, administrative and services staff of the different UECIBs and Intercultural schools of the province of Pastaza, the Amazonian State University (UEA) and the House of the Ecuadorian Culture Benjamin Carrión Nucleo de Pastaza, among others, participated in the event, enhancing the operability of the ceremony under the Manual of Functions of the Departments and Permanent Commissions of the Educational Institution (2017). The day was also dedicated to the recognition of the important work of Dr. Rosaura Gutiérrez as a teacher of the UEA, her permanence in relation to the framework and specific agreement between the UECIB San Jacinto and the UEA during the last 4 years, in the promotion of dialogue specifically in human development and  in bridging between levels of education: basic, secondary and higher education that strengthens bilingual intercultural education, and also to give her a beautiful goodbye before her return to the Dominican Republic.

The program began at 03:00 in the morning as stated in the curriculum of Intercultural Bilingual Education (Art. 92. of the Organic Law of Intercultural Education), with the preparation of “Wayusa” and taking the drink together. The Wayusa as the beginning of the spiritual path is a medicinal plant from the Amazonian rainforest that is taken as a hot infusion at dawn by the families of the Kichwa population of the educational community and in the San Jacinto del Pindo community. This drink of wisdom of peoples and nationalities is used as preventive medicine that harmonizes the human being with nature and strengthens the physical and spiritual body. It is a door to weave a bond with the spirits and connect with the Pachamama (Mother Earth). That is why the Kichwa population and other nationalities of the Educational Institution use the Wayusa to plan their dreams, their daily work, start planting, request that hunting becomes more sustainable and harmonious, improve learning and other uses for spiritual purposes (duration of 2-5 hours, validated according to Art. 171, Constitution of the Republic of Ecuador).

According to Jacob Aguida and Alba Castillo [4], the ceremony of the Wayusa serves to strengthen ties by telling dreams and stories around the fire. As an ancestral practice, it is practiced from 3:00 am to recharge the people with physical and spiritual energy. Through the social ritual the agenda of the day is constructed, the actions are planned taking as elements all around the ritual as an indicator to know how to conduct the day. As the authors point out, “it is built around the cosmology of native peoples, thus leading to being a piece of enormous importance in the imaginary of nationalities” (p.76).

This was followed by a ritual of cleansing, purification and healing with stinging nettle, tobacco and Yachak (the wise man). Use of Tobacco, with the wisdom of Agr. Rodrigo Vargas is applied giving to the beginning kamachina (Council) that man-woman be charged of energy and take the synergy of being able to carry out the works and be cured of all the negative energies. 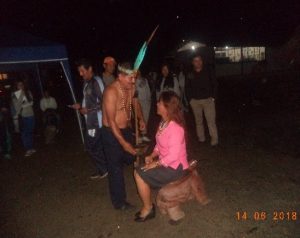 Use of the hortiga with the wisdom of Mr. Oswaldo Vargas, it is applied in the human body especially in the hands, arms, back and knees, generally for the human being to consider it as a purification of the negative things he has done in life.

Wayrachina (Cleanliness) The Yachak Arturo Dagua concentrates with the pachamama through the connection of spiritual knowledge to cleanse all negative energies and heal with positive synergies.

After speeches were given and a UCHUMANKA (shared breakfast) was served. Strong dish, soup, preserved (between 05 hours to 06 hours). 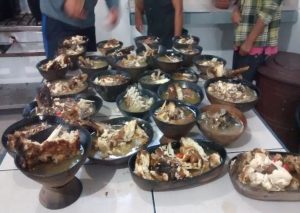 The Uchumanka or olla de ají is a special, spicy preparation of various Amazonian edible products. It is composed of various ingredients: fish, mushrooms, palm hearts, wild animals, and always chili. This dish is kept for up to three days, if it is prepared with bamboo cane – apparently, it could last up to three months. If prepared with carachama, it should preferably be a small species known as shikitu. Fish heads are also used, especially the bocachico. In addition uchumanka is prepared with wild mushrooms, white cocoa seeds, chontaduro hearts, bamboo cane or straw shawl. This dish can be served with cooked or roasted yucca, banana, or potato. A fluid tasting that is commonly practiced in various activities with all social actors (between 06:00 to 07:00).

The program continued with a cultural dance in the chakana. The Yachay chakana or (Andean cross) is a recurrent symbol in the original cultures of the Andes and today embodied in this Amazonian corner designed by Mr. Manuel Gualaceo and his students under the subject of drawing, in joint cooperation with social actors. Its shape is that of a square and stepped cross, with twelve points. The symbol itself is a reference to the Sun and the Southern Cross, although its shape, which suggests a pyramid with stairs on all four sides and circular center, would also have a higher meaning, in the sense of pointing out the union between low and high, the earth and the sun, the man-woman and the superior. Chakana, then, is understood not only as an architectural or geometric concept, but takes the meaning of “ladder to the highest”.

Tushuy ( a dance) in the outline of the chakana, is the institutional dance that manifests the cultural gifts of the Kichwa Amazonian fluid worldview between the cultures and the Nueva Vida community, highlighting the experiences of the grandparents and grandmothers who show in homage to the chonta festival, planting, and the anniversary of the community prevailing the cultural identity of the Kichwa Amazonian nationality; that gives as a connection bridge to the Andean cultural value.

Literature narrated by the students: Mr. Jorgue Dagua and the Ms. Estefania Avilez that gave an advance in the mastery of the Kichwa language. In the physical space of the educational institution, some cultural games such as the contest of the pukuna (blowgun) and waska mishana (clamped rope) and walking in the woods and lunch (from 07:00 to 09:00). 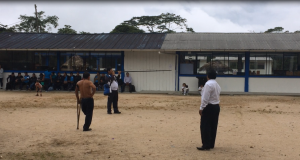 San Jacinto Ecological Tourist Trail We can all intuit to walk in the countryside, on the mountain or on the side of a road. It reflects the contact of the person-nature, but it is fascinating and motivating when science confirms it: according to a diagnosis made by the Sports Commission and the San Jacinto Production Units, walk of 1 hour 40 minutes, on the way three points are served of chicha that allows to enhance your body, through a natural environment, has a great positive impact on the mood of the people reducing melancholy, stress and concern for work and family issues, something that does not happen if the walk is done in the city. 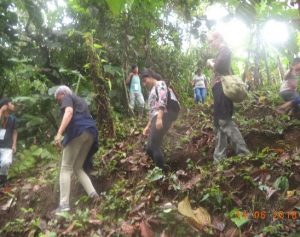 Kari-Warmi New Life Pakcha (Putuimi River Waterfall) Brain scans showed that those who walked the trail, swam in the dike and perceive the water of the waterfall, in this wonderful natural environment experienced a lower presence of blood flow in the pre crust -frontal sub-genual, that is to say, the zone in which resides the bad mood and the worries and that feels to be also related to the depressive pictures (between the 09 hours to 11 hours).

Kamarina (shared lunch) or comelona shares the food of the hunt, tasted the mayonnaise of tilapia with yucca, aji and a stuffed rice, even throwing part of their food and also the bran of the yuca chicha, everything is a taste, emotion and even fanaticism, amid the knowledge and knowledge of its millenary culture that is complemented by cultural dances (between 11 am to 12 pm). 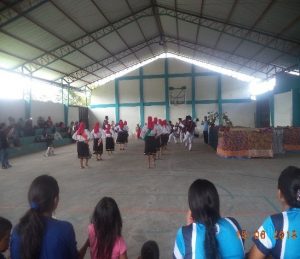