One of the more future orientic things for Aviisi was prepared by participating to the first APIDaysNordic event in Tampere. In the Aviisi the goal is to experiment with contract models  via pilots in order to open up digital materials to both education and research, and possible sometimes later to other new kinds of purposes. Application programming intrfaces or APIs are key in that kind of development.

In the NordicApiDays there program was created with a point of view of an API Economy, which could be understood as an lifecycle and ecosystem of APIs – taking the view of the content provider, API operator, developer and finally the API consumer, who might be you, via an application, which resides in your mobile phone.

One of the key background themes, which quite many speakers approached, was to start API thinking from early on from development. Preferably even start by API first, which seemed to be one key thing, which has got ecosystem rolling in Estonia. It was highlighted by many that it can be a challenge to change familiar ways of working could be difficult; one of the speakers referenced to a Gartner’s definition of two differnt modes of IT – where mode 1 is the traditional pre-planned mode, and the mode 2 is the agile, responsive and fast moving development, where mode 2 was seen important for API Development.

Branding and productization of API

Second main takeway as a whole, is the need to brand and productize the API, and especially companies were keen to find ways to monetize the API. As told in the 19.5. keynote by the main IT provider for airports and airlanes (SitaOnAir), as they have the true data, then they can provide it to the interested parties, who can generate the applications they need. Over few years, they had grown from providing 3 public APIs to a dozen, while at the same time attracting more and more developers. Some of the applications for the https://www.developer.aero/  mentioned were e.g. Miami airport, where employees can be tracked within airport, or to follow up that luggage containors get to the correct plane. The airports contain multitude of Beacons, which can be monitored, which give up-to-date, realtime data , which various 3rd party applications an utilize.

The developer keynote was from 3Scale, talking about the “bot revolution”, which had interesting insights about how e.g. via slack it is possible to implement human-frienly interfaces which respond to text, instead of heavy and complex user interface. The concept used was CI, which in this context did not mean continuous integration but a “conversation interface” . Tiny bots, which do one specific thing, could be very useful and on the other hand quite fast to implement.

Paving the way to the developers – research and education

Then 3rd main point was beside the ultimate consumer, to think also the developers. For example the product owner of http://apinf.io said that focus for them in starting to create an API catalogue was to answer to the first questions – what APIs exist, and how to take them into use. The example which Ms. Björklund about mashup APIs where one can combine data from mutiple sources, is exactly what is thought in the joint effort of National Library and Mikkeli University of Appied Sciences do in the Research Center on Digital Information Management, Digitalia, where one of the aims is to also think interlinking different data sources.

Then EduCloud Alliance (ECA), which aims to digitize teaching was present, where the point of view was to develop APIs and let content owners and learning management system providers to sort out the details. ECA created the basic standard for the API (or selected the most feasible APIs to use), and it leaves to “others” to define the content. For Aviisi point of view it was interesting to hear that e.g. the new school curriculum is now available in digital format, which allows teachers to pick the tools and methods via which they can implement the official curriculum. One idea there was to experiment if the national curriculum development could be ongoing process, which then could improve it, but also create analytics and common practices how teachers could implement it.

As is piloted in Aviisi, the digital materials in education and research is a step towards a digital school environment. Teachers and students can take even the raw materials into use, and get to the actual information of a period by utilizing the cultural heritage materials. This is why were are now actively listening the feedback from the visits to the pilot participants, and we are extremely grateful to those who answered to the survey of use of the digital materials last week. If you missed it, fear not, a new round will be done during autumn, when the school year begins again.

In a workshop organised at Ristiina yhtenäiskoulu in Mikkeli, a group of teachers from upper secondary school were introduced to DIGI and the Aviisi project. Without having previously known or used this resource, after a short introduction, the teachers were left some minutes to search articles, read and finally discuss what could they do with their students.

Though they had the possibility to choose from some clippings, all participants searched actively for articles and most found material somehow related with things discussed in class and came up with a handful of ideas. To learn how the historical newspapers reported or speculated of events or historical figures that today belong in history books was the most interesting aspect of these materials for history teachers. Literature teachers found that articles reporting about writers such as Aleksis Kivi or Minna Canth would be nice complementary material to reading their works; also to examine how the language was used in the early 1900s. Often students are prompted to bring their own clippings from newspaper and magazines, e.g. to make translations into English, something that they could also do with historical newspapers. Even in science subjects, where history plays a secondary role and teachers might find harder to use historical sources, an article about the comet Haley passing Finland in 1909 could trigger some interesting discussion. 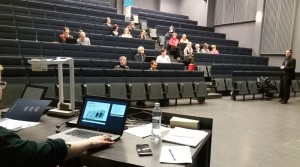 At Ristiina, picture by Inés Matres

In this short exercise we were provided very nice examples of the educational potential of historical newspapers; also we learned what is important for teachers, for preparing and doing activities in class. Teachers are professional collectors themselves, if they find material they can use, they consider important that it remains available for them to re-use, print or share in their working platforms. Many teachers find inspiration outside work and having online access to materials from home is a big plus.

This productive encounter marks the beginning of a collaboration between Ristiina yhtenäiskoulu with Aviisi and my ongoing doctoral research at the University of Helinski, that collects learning stories from teachers and seeks to find current practices of how historical materials (newspapers, but also other open heritage materials) can complement learning activities in class. A short overview of my research is available here; Mikkeli teachers are especially welcomed to take the opportunity and participate in this research to help improve access to and knowledge about these materials. 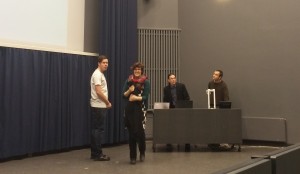 At Riistina, picture by Tuula Pääkkönen