This is a story how open access gave a new life for our book on research ethics. As everyone knows, open science and open access, in particular, is in fashion in recent research policy. However sometimes it seems that there is a lot of talk and discussion on it but not so much real doing. We will tell our about a fortunate case when we were in the right place at the right time.

Scientific books tend to have a long history. It is so also in our case. In 2014, we were ask to keep a one-day seminar on research ethics in a LERU doctoral summer school in Helsinki. Earlier in 2007, we published a book Tutkijan arkipäivän etiikka (Researcher’s everyday ethics) which turned out to be a great success. Hundreds of research students used it in courses held by Henriikka and the book started to gain a lot of quotations as well. When having the LERU course we realised that the concept seems to work very well also in a demanding international audience, and so we decided to write an ethics book for the ”whole world”.

In the very beginning, we realised that we cannot just translate the Finnish book into English but we have to give the book a totally new shape. The basic idea was the same: research ethics is not about guidelines and lists of forbidden things but rather skills to discuss ethically relevant things in making everyday decisions in academic life. Another leading idea which remained was the scope of applying ethical thinking. We wanted to give tools to discuss difficult situations not only in doing research and publishing but also in supervising, recruiting people, assessing researchers’ works and interacting with the society, including mass media. Everything else, the general context, examples, tasks, was ”internationalised”. Also new demands and trends were added to the agenda, for example questions derived from the usage of big data and the ideology of open science.

The basic idea was the same: research ethics is not about guidelines and lists of forbidden things but rather skills to discuss ethically relevant things in making everyday decisions in academic life.

The process of writing the book took two years. In search for a publisher, we set our goals high and started from the most prestigious, Routledge. We sent three sample chapters to the publisher which used three prominent referees from different parts of the world to assess them. We couldn’t be sure for the positive outcome because at that level the competition is very hard. 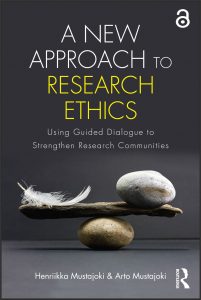 Much to our astonishment, the publisher accepted to take the book into its programme without any substantial needs to make corrections. The work with the manuscript was quite normal: hundreds of emails between us and half a dozen representatives of the publishing house, several misunderstandings, strict deadlines and finally discussion around the cover picture. When the book came out in May 2017, we were happy to be able to present to the world-wide academic community a new approach to research ethics.

Henriikka used the new book in several courses for doctoral students. We both gave a presentation on it in front of research administrators from different EU countries in Brussels. When the notion of ”responsible research (and innovation)” gained more weight in the EU context, we realised that our approach fits very well to the ideology behind this concept. So, Arto led some seminars on responsible research in Kiev and Tallinn by applying the method presented in the book. The feedback was very positive everywhere. Nevertheless, we had such a feeling that our book deserved more visibility and readers.

The feedback was very positive everywhere. Nevertheless, we had such a feeling that our book deserved more visibility and readers.

Then in December 2019 we received an email from the Helsinki University Library. We were told that UH has a project for ”freeing” scientific monographs for open access, if the authors agree on that (read more about UH monograph project on intranet Flamma). Because the library has a limited number of resources for that, they selected only the best books for this option. ”Best” means in this case the so called Jufo-3-category, which is for the highest ranked publishing houses in the Finnish system of publications. We were more than excited about the proposal and immediately answered yes. When researchers write articles and books they want to have as many readers as possible because without the audience a publication has no impact. After some days, we received an email from Routledge and agreed on practicalities. Everything went smoothly and quickly and by the end of January 2020 our book was ready to be read and downloaded on the website of the publisher.

Freeing articles and books for open access is a part of the UH’s publishing policy. In addition to that, the Ministry of Education uses a coefficient 1.2 for open access publications in counting bonuses for publications in their financing formula, So, the project of making publications free to access brings a triple benefit: the university gets a little bit more taxpayers’ money for its work, the books published by its researchers gain more visibility and the university receives a new feather in its cap as an open access positive institution.

For us, the open access status has also a principal meaning for two reasons. First, in the book, we write that access to research output is a fundamental characteristic of the research world, because without sharing there is no research development. The second relevant issue is that Henriikka now works as an open science coordinator for Finnish research community (Open Science in Finland).

So far so good. However, we realised very soon that open access does automatically mean a wider readership, if no one knows that the book is now available for free of charge. Therefore, we started a campaign for the glad tidings by using all possible channels: Facebook, Twitter, Linkedin, emails and blogs, whatever we could think of. Now we look forward to getting more readers and hopefully also citations for our book. We are not against it, if you choose to distribute this information amongst your colleagues and friends.

Arto Mustajoki (TUHAT, ORCID, @ArtoMustajoki), an emeritus professor of Russian at the University of Helsinki, has also been active in university administration and research policy. He continues to work as a researcher and works part-time as a senior researcher at National research university ”Higher school of economics” in Moscow.

Henriikka Mustajoki (ORCID, @HenriikkaMusta) works currently as a Head of Development, Open Science, coordinated by The Federation of Finnish Learned Societies. She has a PhD in philosophy (bioethics and ethical decision-making), and she has extensive experience in research and lecturing in UK, Australia and Finland.