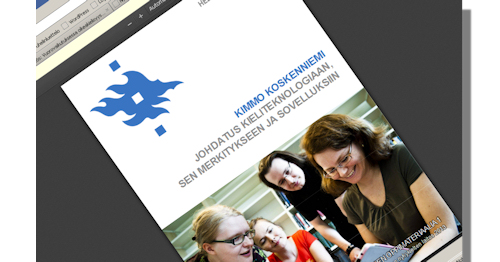 England may have lost a mediocre cricket player in Peter Trudgill, but the world of linguistics gained a living legend.

Students of the Language Change Database Project course interviewed the noted sociolinguist and his wife, Jean Hannah, over coffee a day before his guest lecture at the Metsätalo building in Helsinki on March 18th. Their questions revolved around Trudgill’s experiences as a student at Cambridge and Edinburgh, his career choices, and the future of linguistics and academia.

In his youth Trudgill did indeed dream of playing cricket for England but ultimately his career in academia progressed quite organically. In hindsight, he said he could not “imagine anything better” and has enjoyed his time at several universities, including the University of Lausanne, Switzerland (home to “the best coffee served at a university”) and the University of Agder, Norway, where he is currently tenured.

The past is now

Unfortunately, a long career like Trudgill’s might be harder to achieve today than in the 1960s. In his view, one of the biggest challenges facing the modern academic world is zealous business thinking, which hurts the fields that are considered “unprofitable”, such as the Humanities.

Putting business first might prove shortsighted, as resources are needed now if the world wants to document languages that are under the threat of extinction. Studying those languages would shed light on the ways prehistoric languages have developed throughout human history. 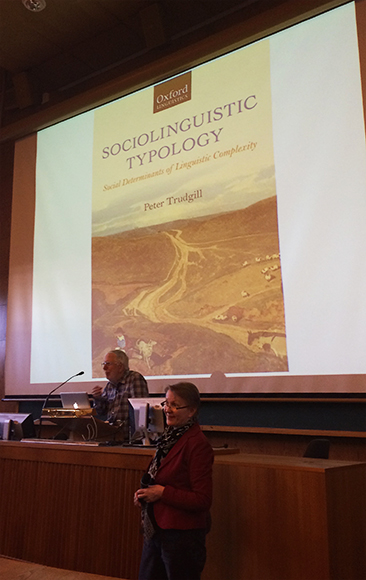 Trudgill giving lecture (on the left), Professor Terttu Nevalainen (on the right)

The origins and evolution of human languages still remain obscured by lack of data.

As linguists we can only try to hypothesise how prehistoric languages may have functioned and the prevalent way to do that is through the Uniformitarian hypothesis, meaning that by observing languages in the present, we can understand what human languages must have been like in the past.

However, in his lecture titled “The Uniformitarian Hypothesis and Prehistoric Linguistics” Trudgill urged researchers to exercise caution when using the hypothesis to make generalisations. He stressed that linguists need to be mindful of chronological and geographical bias and not build models based solely on languages spoken in modern societies, which are highly atypical in the broader history of humankind. Living in “societies of strangers” where the vast majority of the people do not know each other is a very recent development in human history.

In the absence of time machines

Trudgill does not mean to say that observing modern languages is fruitless or that we should abandon the Uniformitarian hypothesis.

While we and our prehistoric ancestors share largely the same physiology and language faculties, we have no way of gathering any hard data on the prehistoric languages themselves (short of inventing a time machine). Thus we must hypothesise based on the workings of modern languages.

Effectively, Trudgill argues that more attention should be paid to the small, endangered and “remote” languages that are still spoken in a context that strongly resembles what prehistoric societies were like: small and tightly-knit groups of people who all know each other, or “societies of intimates”.

Indeed, research on such languages has yielded surprising nuggets of insight into what our prehistoric ancestors’ languages might have been like. Small communities give rise to language features that seem atypical and exotic if looked at from an Indo-European context, yet such features will most likely have been significantly more commonplace in prehistoric times.

Examples of such features abound in small languages.

One example given by Trudgill is Onya Darat, a language spoken on the island of Borneo, whose system of personal pronouns shows generational affiliation. In other words, their personal pronouns signify whether the addressed person belongs to the same or younger or older generation as the speaker.

Such a feature can only appear in a society where people know each other and are aware of everyone’s ancestry. Thus we can surmise that such complex structures linked to non-anonymity may have existed in prehistoric languages, even if they are exceedingly rare in modern ones.

Trudgill likewise asserted during the coffee meetup that more linguists should be engaged in documenting small languages around the world, as they are verging on extinction in this era of globalisation and interconnectedness. Now is our last chance to record many of them for posterity.

Lamenting that he himself had not done more fieldwork in his career, Trudgill half-jokingly encouraged younger linguists to “forget about English” in favour of focusing on conserving these endangered languages. Hearing a Professor of English make such claims might sound strange, but it only illustrates the urgency of such conservationist efforts. 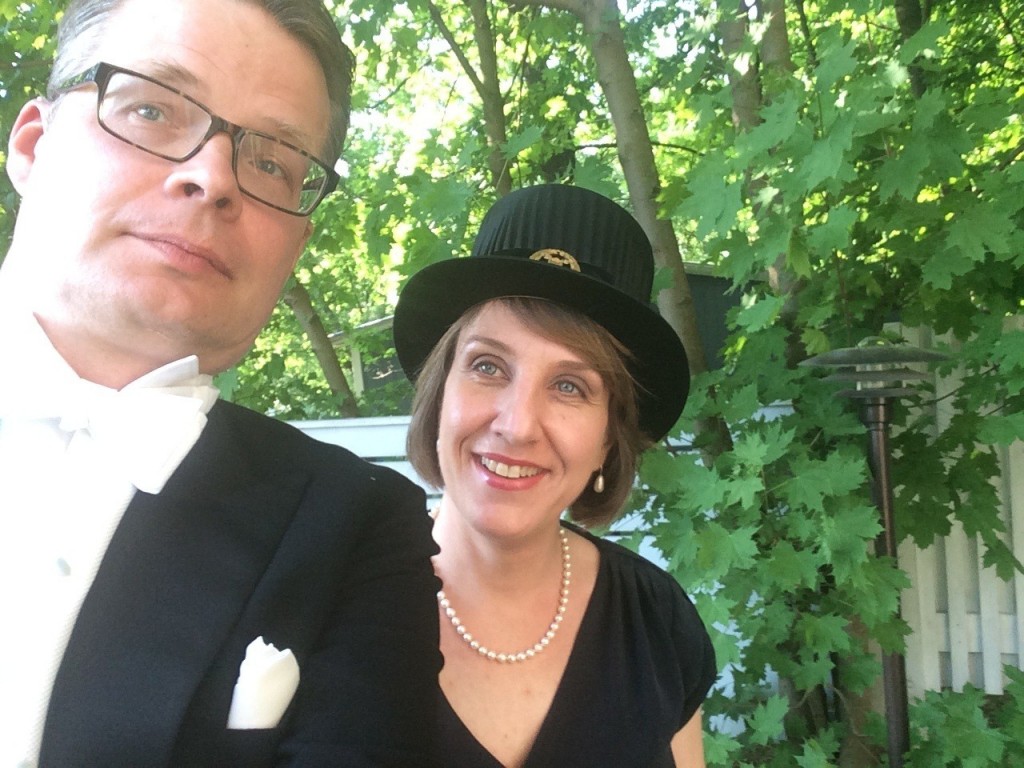