The basc idea of a spreadsheet program is that it allows you to do different calculations using the cells in the grid. As all calculations are performed using formulas, you can change the numbers in the calculations at any time and let the program redo the maths for you.

A formula begins with an equal sign (=). After the sign, the formula contains the cell addresses and maths operators included in the calculations.

In a spreadsheet program, each column and row has its own identifier. These identifiers together form the address of a cell:

In its simplest form, making a formula only requires that you enter the maths operator and the addresses of the cells used in the calculation.

Always use cell addresses in formulas instead of the number entered in the cell! This allows you to easily copy formulas and change the numbers in the cells referred to in the formulas.

In the example below, cells A2 and B2 are added together. The steps to creating a formula:

You can edit functions and formulas in the formula bar above the columns.

The maths operators most commonly used in spreadsheet calculations include:

In addition to the most common operators such as addition, subtraction, multiplication and division, spreadsheet programs contain a great number of different functions. Functions are predefined formulas.

The most common functions are conveniently placed under one menu in the Formulas tab. Click the small triangle under the Autosum icon to open the menu shown in the image below. Along with addition, the menu contains a function to calculate the Average of a series of numbers. 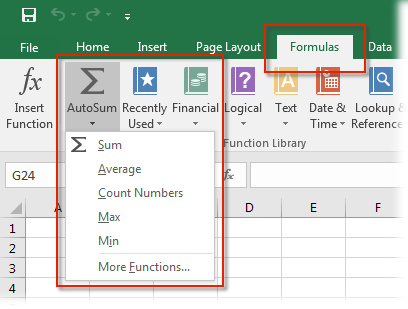 The area of the spreadsheet where you want to direct the formula is entered as the cell addresses with a colon between them, e.g. =SUM(A1:A10). You can use a semi-colon to add more cell values to the formula, e.g. =SUM(A1:A10;D9). In Excel, the Sum function is available as a button in the toolbar. With this Sum function you can add the
values of an area in the spreadsheet as follows, for example: 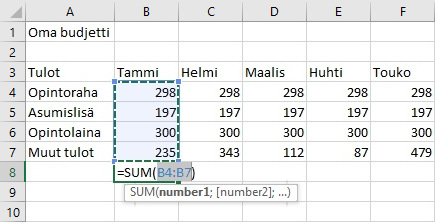 Always check the area that the program suggests; the program will only select an uninterrupted area automatically, so if there are empty cells in the area, it will not select the cells on the other side of them!

You can also do sums as follows: select the cell area you want to add, and include the empty row or column where you want the result to be shown. Click on AutoSum. This feature only works to the right and downwards.

You can copy a formula you have created to other cells. If, for example, you have calculated your student allowance for each month separately, you only have to create a formula for the January row. Then you can copy the formula to the other months.

With Excel, formulas are copied with the so-called Fill handle; the Fill handle is located in the bottom right corner of an active (selected) cell. The stages of copying a formula:

Take a look at the video below to see how to easily create and copy a sum formula in Excel!